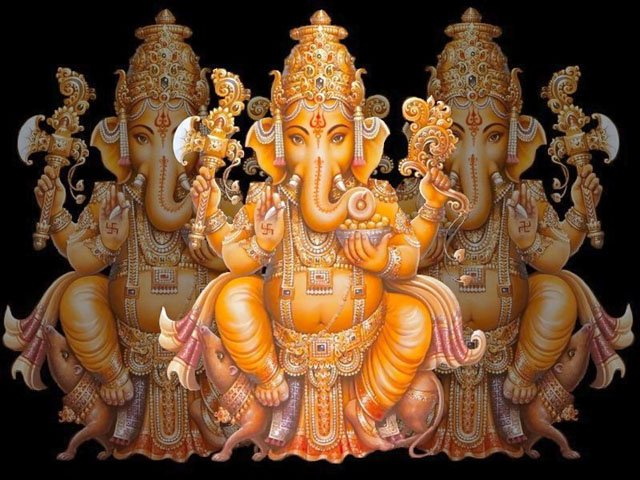 Today is Hindu God Ganesh’s birthday and Hindus the world over will be celebrating with a festival in his honor: Ganesh Chaturthi.  I have no idea how many candles he’ll be blowing out on his cake today, but I do know a few other things about my favorite elephant headed deity…and I’m totally going to share his awesomeness with you right now.  I have to warn you, I have a serious God-crush. 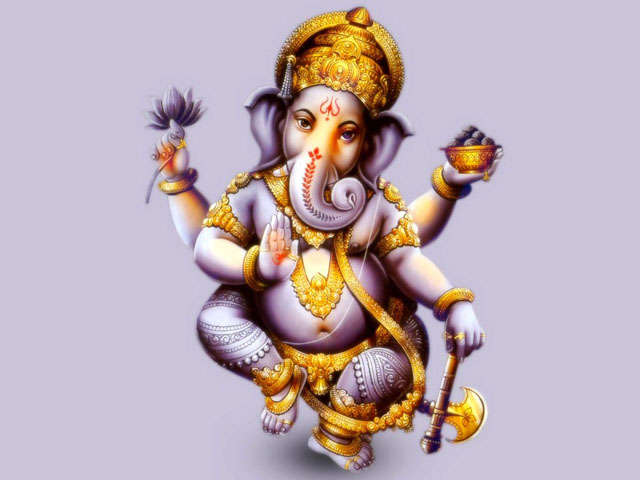 Sri Ganesh is the remover of obstacles – the God of education, wisdom and knowledge.  He is known for his sense of humor, kindness and riding around on the back of an itty-bitty mouse.  If you have a problem, yo, he’ll solve it.  Check out his hook while his DJ revolves it.  Ganesh, Ganesh, baby.

What’s with the Elephant Head? 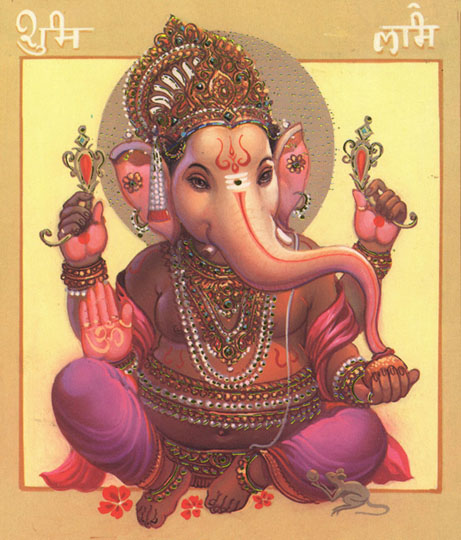 Here’s the abridged version…short and sweet:

So Shiva (a God) went off on a very long meditation retreat and left his wife, Parvati (a Goddess), at home alone.  Wanting to bathe but needing someone to stand watch, Parvati decided the best solution was to ask their son to stand guard.  Following his mom’s instructions, he stood at her door and stopped any and all from entering.  Unfortunately for Ganesh, Parvati failed to tell him about his father.  Shiva had been away so long that neither father nor son had ever met and knew nothing of each other.

Lord Shiva, upon returning home, was denied entrance by Ganesh.  Pissed beyond belief Shiva did what any  husband would do and cut off Ganesh’s head.  Parvati promptly (and understandably) flipped out.  Lord Shiva went to retrieve Ganesh’s head, but as (bad)luck would have it, it was nowhere to be found.  Upon seeing Parvati’s distress, a nearby elephant offered his own head so that her son could live.  A little duct tape and some super glue and that’s how you get a God with an elephant head.

In 1995 and again in 2006 Ganesh murtis all over the world were witnessed by Hindus, non-Hindus, atheists and agnostics drinking offerings of milk.  These events, known as the Hindu Milk Miracle, were officially declared miracles by the Vishva Hindu Parishad.  Check out the video below.  Yes, you can see a little drip and a little dribble here and there…and some of the footage is not 100% convincing, but some of the footage shows level spoons being drained while being held up to the murtis.  There is no milk anywhere near the sides of the spoon.  I have to say this makes me smile…which I believe was precisely what Ganesh had in mind.

As I previously mentioned, Ganesh LOVES to help people out.  Had he been a boy scout he would have a billion citizenship merit badges.  He genuinely delights in lending a helping hand to those in need.  So how can you get Ganesh to give you a leg up?   How do you get his attention? Try one of his mantras. Mantras, at least in Western culture, have gotten a bad rap.  I blame this squarely on all those “gurus” that were running amok in the late 60’s and 70’s (thanks a lot guys!).  Try not to let them mislead you.  Words have power…and words that have been repeated for thousands of years have super-concentrated power.  Mantras are also relaxing and can help induce a meditative state.  Here are a few for you to try:

I know Sri Ganesh has provided me comfort in times of struggle and has helped me more times than I can count.  For those and many other reasons, I absolutely love him to bits.  Thank you, Sri Ganesh…and Happy Birthday!

This entry was posted in CULTURE and tagged BODY MIND AND SPIRIT, HOLIDAYS, LOVE, SPIRITUALITY. Bookmark the permalink.
Scroll Up